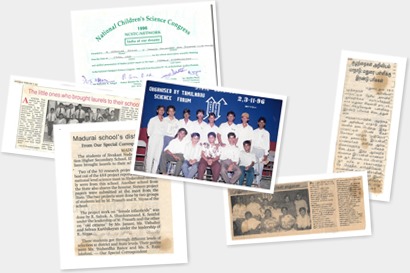 Year 1996: My team from school would travel to Karumathur, a small village near Madurai to collect data and statistics for a project to present at the National Science Congress. We had no clue of the risks of project we were pursuing which would later win us a National Award (after District and State Level). The topics were chosen by our guides and ours was on social science which actually gave us an unique edge over physical science projects.

I was on a team with Prasad, Safeek and Senthil to research on a hot social topic – ‘Female Infanticide’ – The intentional killing of female infants soon after birth. More detail on this topic is available in the classic 1986 India today article – Female infanticide: Born to die or watch the movie Karuththamma

We would go around the village interviewing people about why and how it is done. ‘Innocence is bliss’ – I don’t think I have the guts to do it now.  We got to know about the recent killings at that time and who and how it was executed. Quite some people gave us information on real cases.

It is almost two decades now and I could hardly recall our interviews. But there was one interview that I could never forget. We were discussing with one villager on a recent incident at that time and how it was executed. We were testing our knowledge of methods (paddy and poisonous cactus milk or ‘Kalli Paal’) that we read on papers and watched in movies. But he brushed off those claiming that they were very old methods with low success rate! Rather the newer method was to put them in a jute bag and suffocate them to death! How Cruel!The surprising fact was that he explained it in high level of detail citing references without fear or remorse.

I have no idea what has changed in the past two decades but the ‘Thottil Kuzhandhai Thittam – A baby hatch program by the Tamilnadu Government’ still exists today!

Some not so Interesting Facts: