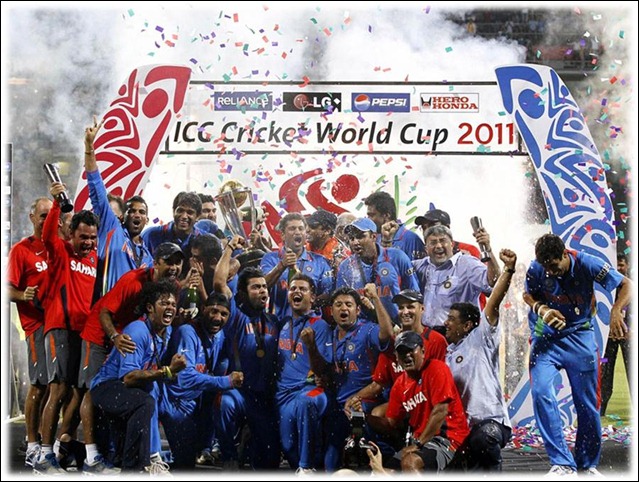 1983 – We the last of the Generation X were born before India won its first cricket world cup and were too young to experience that victory. But we grew up hoping to experience it, not for a year or two but for 28 yrs. By this time my son is of the age I was during the first victory. Cricket to us is more than just sport, it is hope. It gives more hope than what any of the self motivation books or talks can provide, It gives more hope than real world success stories; coz in cricket you are not hearing a story, you are part of the game. Though not essentially playing it you participate in it making predictions, ball by ball. And like the stock market it is highly unpredictable, no matter how hard you try to do it and always end up missing some factor. No other game in history has the chances of victory less significant on capability of the players.  From the sun and rain gods, the chances of head or tail at the toss of a coin, geography of the venue, the crowd factor, several factors can play spoil sport. To win the game it is not just required to defeat the opponent but defeat nature itself. 600 balls of strategy by players on the field and off the field, every ball is a game by itself.

Cricket in India has grown along with us, along with our economy. During those times we were not yet there on the global stage. Cricket gave us hope that we could demonstrate ourselves equally on the global stage. Many of my friends would argue what cricket could do anything to India rather waste some productive hours. I would still argue that the ‘hope’ factor is more important to reach horizons, to challenge the impossible rather than just do hard work. That’s the game of cricket, you predict something and there would arise a player who would prove it all wrong, not just your predictions but nature and science itself. What else could give you more hope.

What could the statistics do to the victory of Srilanka. Right from the beginning the statistics decided Srilanka’s victory and at 31-2 how many could genuinely predict India’s victory. As if history did rewrite itself to challenge the capability of humans India won when it was least expected.

No other place in the world can you see the gods of India together, No other victory is celebrated so much. The cricketers, the politicians, the businessmen, the shining stars of Bollywood and a billion plus spectators; nothing would have seen the whole of India praying for a common goal, The victory of India. For there are no different religions, no different languages, it is a feeling that the whole nation has in common.

. Against all odds India did win. To prove that we are very much in the global stage and give the next generation the hope to do more. Let this victory challenge all that’s been decided impossible in this country.