After I wrote the blog below I just Googled to find if such trends are expected in the near future. As usual I realized that I am already 6 months behind. The video in the left may explain better the way chrome is going to evolve and the future of net books. Its not ‘in the near future’. It is happening! 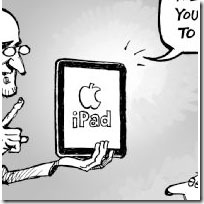 Me and my colleagues were discussing how iPad would change the computing landscape. What we discovered was that while most people would continue to see iPad as just another gadget it is a part of a major change that would impact IT in the near future. For iPad to be seen as an replacement to Laptop or PC one would complain the lesser processing capacity and memory. If we see the usage from the end user perspective these hefty machines would mostly be used for Email & Documents (Official), Browsing & Entertainment (Personal) and file storage. Cloud Computing (http://shankarananth.com/?p=261) as discussed in my earlier blog would transform the way users access these applications.

Currently most or all of these applications can be accessed in the cloud without the need for installation of huge software or processing capacity though most users don’t actually use them beyond email. A manager for example can access all his emails via hosted solution and can save/edit call types of documents he would need via Google docs or Zoho. A Developer or Engineer would still complain access to proprietary Programming or Engineering applications.  These applications can be installed on Cloud OS Servers and they can still be accessed via browsers.

This transformation has made Google release Chrome in an already flooded browser market. To Google, Chrome is an OS to deliver its next generation cloud applications. Yeah! Its true, chrome even has a Task manager. This would be big blow to Microsoft with its major revenues from Windows and Office software. Don’t be surprised. Future Google chrome may not be installed on Windows. Chrome would be booting with the machine at startup, connect to the internet and would be the OS to access applications on the cloud. Over the years I never expected a ‘SEARCH ENGINE’ as I saw it years ago, would challenge Microsoft on Software or Chinese Governments on Information Policies.

With all applications accessible via the browser the dependence on Windows also would tend to go down. One can still argue that linux was all around with the necessary software freely available but still could not change Microsoft’s dominance. Here’s the trick, to change people’s mindset with PC would be difficult. But as new devices come up Microsoft has to freshly compete. For example the windows mobile market share Vs Apple iPhone or other Mobile OS is not comparable to it PC OS market share. Slowly Apple would get into the market with new generation devices that would replace the PC and its functions. This is one more reason why Google came up with Android and Nexus One. Soon we can expect a gPad from Google.

While internet access and higher bandwidth is widely available and constantly improving there is still a worry about accessing applications offline. While Google has it Gears to address this issue there are many developments expected in this area. So are concerns with security which are to be addressed for people to adapt the technology as fast as it is growing now.

The technology is promising. But it is up to the people to decide its tenure in the market place.