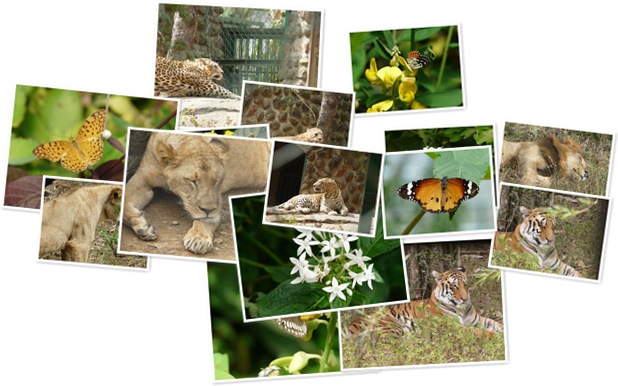 On a Christmas day eve we planned a trip to Bannerghatta National Park. We chose that destination hoping it would not be crowded as it is far away from Bangalore. We booked a taxi on Fast Track. We started at 10:00 AM and reached there by 10:30. It was not far as we thought (16 Kms from Silk Board). We spent some time to have some grilled corn. We did not carry food with us as it was mentioned as plastic free zone and we were not sure if it would be allowed inside. By the time we reached the ticket counter there were already a queue of 20 members. We chose the one hour grand safari (Rs. 125 per head, Rs. 20 per Still Camera, Rs. 110 per Video Camera Holiday Rates). We entered in and had to wait in the grand safari queue which was already loaded with around 70 people. After a half an hour wait in the queue we were able to board the van. We expected a Zeep Safari but it was a van safari. The van was fully loaded with 35 people and the view form the van was not good for photography. But there were green colored vans which seemed better built for safari. But there were only a few of them used for Lion & Tiger Safari. The Lion & Tiger Safari costs less and the duration is for half an hour.

During the safari we could be able to see Deer, Sambar, Bear, Tiger and Lion. The experience was indeed good. We could be able to see the animals so close in an natural environment. The bears surrounded our vehicle and we can see them very closely. We could see the Lion and Lioness playing which we could not experience in a zoo. At the end they dropped us down at the butterfly park. One cannot expect much at the butterfly park but it is a bit refreshing after the hour long tiring ride. For lunch we tried to look for a decent restaurant. The Jungle lodges looked good, but we have to return back after seeing the awfully maintained restaurant. We went back to the zoo only to see a huge (really huge!) crowd waiting in the ticket counter and the safari queue. Oh my God! Thankfully we came in early or else we should have spent all our time in the queues. There was a decent collection of animals in the zoo. In the zoo and the park surrounding we could see hoards of families having home cooked puliyodharais and thayir sadhams. It looked like a family picnic spot.

We returned early to avoid crowd in bus. We took the 365 Volvo back home. At 4:00 PM we could see a still growing queue to buy tickets.